Aerial Aces of the Universal Newsreel is summed up best by its sub-title, A Researcher's Guide to the Aviation Related Stories Released Nationally by Universal Pictures, 1929-1931. It’s a useful and practical resource guide to the aviation people, places and events of August 1929 through December 1931, as seen through the camera lens of the Universal Newspaper Newsreel, as it was known back then.

Aerial Aces contains descriptions of 219 aviation-related stories released by Universal during that time period. They are listed in release order and each is identified with the title, reel number, event date, location, and length in seconds. Each story has a story-line based on the newsreel synopsis sheets, a description the film contained in the story, a word-for-word copy of the original narration script, and production and historical information, as appropriate. In the interest of accuracy, all newsreel titles were cross-referenced against various NARA inventories and only those titles that are known to currently exist are presented here in detail. The stories that didn’t survive, mostly due to film decay over the years, are listed by title in the Appendix.

The 219 stories contained within Aerial Aces: A Researcher's Guide to the Aviation Related Stories Released Nationally by Universal Pictures, provide a timeless reference to moving images of the aviation related activities covered during the first three years of the Universal Newsreel. To see history as it actually happened is enlightening, instructive, and often rather dramatic. 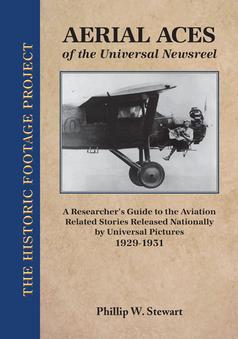