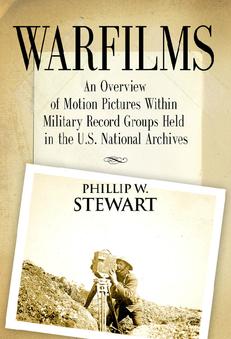 I share with you this short volume (a primer if you will) about the motion pictures of twentieth century warfare held in the film vaults of the U.S. National Archives and Records Administration.

This book is a synopsis, a summary, an abbreviated findeing aid of the subject as stated in the expanded sub-title, below. While it does not list all military films, this volume does identify and describe over 350 of them for your review. My hope is to pique your interest so that you will explore many more reels of historic military action that was caught on film.

Many professionals in the non-fiction book writing business say that for a book to be successful an author needs to have a catchy title. They also say that if a sub-title is needed it should be kept short and to the point. Well, I think I did very well with the title "Warfilms," and came close with the subtitle, "An Overview of Motion Pictures Within Military Record Groups Held in the U.S. National Archives."

As good as it is, a more precise sub-title would be…

"An Overview of the 119,000-Plus Reels of Classic and Historic Motion Picture Film Produced, Acquired, or Captured by Twentieth Century American Armed Forces at Peace and at War, Located Within the 35 military record groups at the United States National Archives and Records Administration, Archives II Facility, in College Park, Maryland, USA."

I know, that’s a bit of a run-on sentence, but it’s a great deal more descriptive and is what this book is all about. But alas, it’s too long and wordy for the title page.