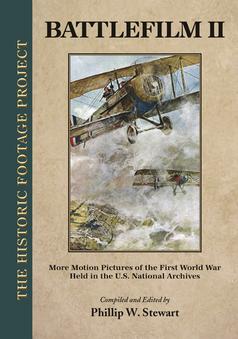 In my continuing effort to promote what I consider to be an underutilized visual resource of historic importance, I share with you this volume about the motion pictures of World War One held within the film vault of the U.S. National Archives and Records Administration (NARA).

This is the companion volume to the first book in The Historic Footage Project – Battlefilm: U.S. Army Signal Corps Motion Pictures of the Great War. I have worked on this new book for over five years in an effort to get it published and into your hands before the centennial of the start of World War I. It appears that I made it just in time.

As mentioned in the Preface of the first Battlefilm book, most—but not all—of the motion pictures of the First World War held within America’s film vault, the National Archives, were produced by the U.S. Army Signal Corps. As further research would prove, I was mistaken. I should have used the term “many” not “most.” As things turned out Battlefilm II identifies just over 1,000 films that are cataloged as being produced by other organizations and agencies, both foreign and domestic. Assuming my addition is correct, between the two books then, there are just under 1,500 titles for you to review. Does that mean that I have all of NARA’s WWI films identified? As vast as the film vault is, I doubt it. Based on my experience, there is always at least a reel or three that refuse to cooperate with any inventory and hide in the corner of the wrong storage shelf.