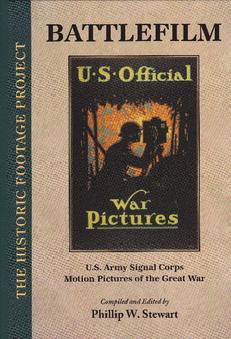 American "Doughboys" claw their way over-the-top of their trenches and charge into the smoke and cratered No-Man's Land.

A young Air Service Captain, by the name of Rickenbacker, twists and turns his Spad pursuit airplane in mortal aerial combat with the "Hun" at 10,000 feet.

U.S. Navy warships plow through high seas to protect a convoy of transports traveling slowly across the stormy Atlantic from the deadly German U-boat.

These scenes of World War I action (and thousands more like them) exist today on silent, black and white motion picture film. They were shot on-location, as history happened, by dedicated and courageous U.S. Army Signal Corps soldier-cameramen. These historic films are preserved in the National Archives and Records Administration (NARA) as part of what is one of the world's largest film archives. Many of the WWI titles are cataloged as part of the Record Group 111, Records of the Office of the Chief Signal Officer.

For the first time, in book form, there is concise information about the surviving motion pictures that were taken during what was known then as the Great War, over 100 years ago. This, the Second Edition of Battlefilm, details 488 film titles that cover America's part in this conflict. Each of the 993 reels of action is described using data gathered from actual Army records. Also included are films produced and donated (or seized) by Allied and Central Power countries.

This information-packed catalog and guide is designed to help you find the films and scenes you need through the books' logical layout and an extensive index. Also included is the NARA catalog number for each title so that you can conduct further research or order a copy for your own film or video collection.