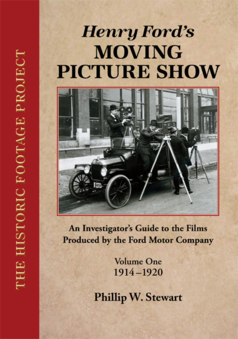 Henry Ford’s Moving Picture Show: An Investigator’s Guide to the Films Produced by the Ford Motor Company series focuses on the initial six years (1914-1920) of the Ford Motor Company motion picture collection that is held in the U.S. National Archives and identifies 935 films. To assist in your investigation of this historically significant film collection an alphabetical title index and a comprehensive subject index are included in the book.

This book was written to facilitate the public and professional use of the film footage in the Ford Motor Company Collection and to describe its contents in a way that has been, until now, unavailable. When the U.S. National Archives  accepted these historically significant films in 1963, it provided an all inclusive formal title of: Films Relating to the Ford Motor Company, the Henry Ford Family, Noted Personalities, Industry, and Numerous Americana and Other Subjects…and this pretty well sums up the visual content of the collection.

Henry Ford’s Moving Picture Show  provides a useful and practical resource to the moving images of the world during the first part of the 20th Century, as seen through the camera lens of the Ford Motion Picture Department and its successor, the Ford Photographic Department. These films have superb historical value that stems from their very broad subject-matter coverage. Overall, the moving images contained in these films are truly Americana in motion.