"This book is absolutely indispensable to a student of WWI aviation."
Walter J. Boyne, aviation historian

"It's the next best thing to seeing the films themselves."

War Wings is a unique reference guide that describes, in detail, over 2,500 scenes of WWI aviation related documentary motion pictures.

Contrary to some widely held beliefs, large, heavy, wooden boxes with crude brass-encased glass lenses, metal hand cranks, and ungainly tripods were, indeed filming the events of the Great War. Scenes of pilot training, aerial combat in the skies over France, airplane manufacturing, and the post-Armistice testing of enemy airplanes were all captured on film from 1917 through 1919. The films that found their way back here from "Over There" are now preserved in the U.S. National Archives.

The films cataloged in this book document a fascinating visual story of war in the air of 100 years ago. It is incumbent upon all of us, as we begin the process of re-telling, re-writing, and re-showing the first air war to generations of people with little knowledge of it, that we include the moving image element--the motion picture. 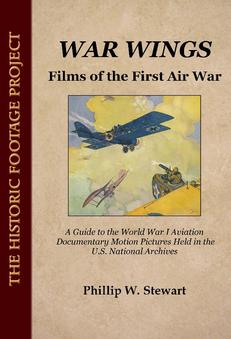