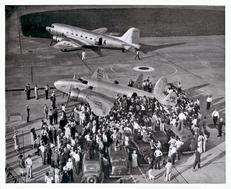 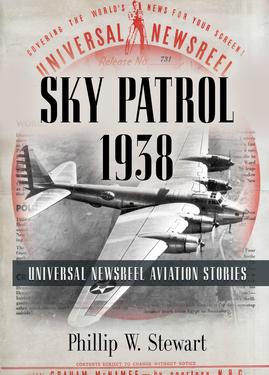 1938--a year of aerial exploits! Dare-devils, new designs, records, wrong ways, crashes, war, and flight 'round the world. And the newsreels were there! Sky Patrol 1938 examines these and many other aviation topics released by Universal Newsreel. It's the next best thing to watching the films themselves.

Those of us, who are fascinated by 1930's aviation, study the decade primarily through the written word and photographs. If we're lucky, we get to see a favorite vintage airplane at an air show, beautifully restored and oozing vast amounts of Art Deco ambiance. However, there is another resource--the MCA/Universal Newsreel Library Collection preserved within the U.S. National Archives. Unfortunately, most aviation enthusiasts and historians are unaware of this treasure trove. Sky Patrol 1938 details 89 aviation stories and provides a unique written record of the year's celluloid documentation of our aeronautical heritage. Related catalog cards, paper documents, microfilm records, and film reels were methodically examined. The resulting information: title, story line, narration script, word picture action, cameraman, and historical notes, provides a comprehensive rundown for each 1938 aviation title. Featured stories were selected because of the dominate aviation content and/or historical significance, and are presented in the order they were originally released. Sky Patrol offers useful and practical information about aviation, aircraft, people, and the aeronautical events of 1938 as seen through the motion picture camera lens of the Universal Newsreel.